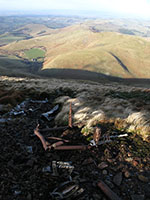 Last week I went walking in the Cheviot hills, just south of Kelso. I walked along the Pennine Way past some horseriders and up to the 564m summit of The Curr. There were great views northwards into the Scottish Borders and south to the summit of the Cheviot in England, just a few kilometres away.

Not far from the summit at an altitude of about 540m on the north-western slope of the The Curr is the wreck of a Mosquito bomber that crashed here during WWII. It is only about 1km from the border between Scotland and England, and about 6km north-west of the Vickers Warwick wreck site on The Cheviot (see my page about this site here).

There is a small scar on the hillside that marks the point of the crash, and all the wreckage lies at this point, except for a piece of armour plating about 60m further down the hill. Identifiable pieces of wreckage include undercarriage sections and possibly engine cowling. Some small wooden parts can still be seen (the Mosquito bomber famously used wooden components in its construction).