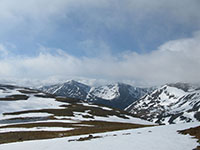 Three weeks ago I spent a couple of days in Aviemore, and went for a couple of long walks. The first was a walk through the Scots Pines of Abernethy Forest, somewhere I’ve not been to before. I had hoped to see some wildlife (including Capercaillies, which I’ve never seen before), as this is the right location and time of year to see them lekking, but I only caught a glimpse of a couple of black birds flying low though the trees and I couldn’t tell if they were Capercaillies or more probably, Black Grouse.

From the forest, I walked up to the 810m summit of Meall a’Bhuiridh past Ryvoan Bothy (which has a lekking area next to it, but nothing was using it). On the climb up to the summit I saw a large bird of prey fly through Ryvoan Pass but I wasn’t able to judge its size and identify it, it may have been an Eagle or an Osprey. Once I was on the summit, I didn’t stay there long as the wind was cold and strong. Although Meall a’Bhuiridh is not a particularly high or difficult summit to get to (it is one of the few Corbett summits in the Cairngorms), it is an excellent location from which to see the Northern Corries of the Cairngorms and Glen More. I then headed back to Abernethy Forest via the minor summit of Creagan Gorm. 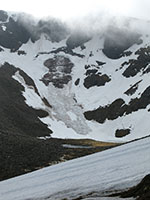 Avalanche debris on headwall of Coire an Lochain

The second walk was a much more adventurous affair, to the summit of Ben Macdui and back. My route took me along the path that runs to the north of the Northern Corries and up onto the shoulder of Cairn Lochan. There was a great view here of the remains of an avalanche in the headwall of Coire an Lochain that had revealed the steep bare slabs of rock underneath, a well-known feature of this particular corrie in late winter (see the photo to the right).

Although the walk took place in early spring, there was still a large amount of snow cover on the Cairn Gorm – Ben Macdui plateau, particularly around the summit of Ben Macdui, and made it feel like a proper winter walk, and I needed to use my ice-axe on a couple of short and steep sections of hard snow. I’ve walked to the summit of Ben Macdui many times, but this was the first in winter conditions.

I had the summit of Ben Macdui all to myself and I was able to see the place next to the summit cairn where I had camped 8 months ago (see my previous blog posting ‘Sgòr Mòr and Ben Macdui‘), looking a lot less inviting! The wind was fairly strong although not particularly cold and I was able to get some glimpses of the Cairn Toul – Braeriach ridge to the west through gaps in the clouds that were racing across the summit of Ben Macdui.

I saw a few Ptarmigan in Coire an Lochan and on the plateau, Snow Buntings on the plateau and right on the summit of Ben Macdui, and a Mountain Hare on the plateau too (still mostly in its winter white coat), not an animal I’ve previously encountered a lot of in the Cairngorms on previous walks.

You can see the photos I took on the walks on my website here.