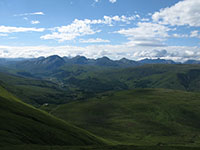 On Monday I travelled to Glen Carron and climbed up to the summit of Sgurr nan Ceannaichean. I did not walk up the usual way recommended in guide books but instead walked up via Coire an t-Seilich and the north-western slopes of the mountain. This was over difficult terrain and the overgrown vegetation, boggy ground, steep slopes of wet grass, insects, humidity and heavy rain made it a pretty unpleasant climb! Once I was near the summit however, the weather cleared and I was able to take some photos of the great views, which included the peaks of Torridon and Letterewe to the north.

Sgurr nan Ceannaichean is an unusual mountain in that it only became a Munro summit in 1981 and in 2009 it stopped being a Munro summit. This sort of madness really soured me on the whole idea of Munro-bagging (see my blog posting ‘Munro nonsense‘).

On the climb up the mountain I also looked for any wreckage from the wartime crash of a Whitley bomber that crashed near the summit in 1941 but only managed to find a small number of insignificant pieces of metal from the plane in Coire an t-Seilich and on the north-western slopes of the summit. I believe the majority of the wreckage was cleared in recent years.