During my recent 2-day trip to Ben Macdui I took the opportunity to have a look and see what snowpatches are still surviving in the vicinity of the summit of Ben Macdui. This follows on from my trip to the Cairn Gorm – Ben Macdui plateau in early July (see the blog posting ‘Summer snowfields in the Cairngorms (3)‘).

1. These photos were taken from Sròn Riach to the south of Ben Macdui on Saturday 14th August and show two snowpatches in Coire an Lochain Uaine below Ben Macdui. The first photo shows both patches, one is very small at the foot of a buttress and hard to see and off to the right of the obvious patch, this patch would have melted pretty soon after the photo was taken. The second photo is a closeup of the larger patch, and there isn’t a lot of apparent depth to it, so perhaps this patch has gone now also. 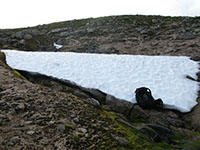 2. This photograph was taken on the evening of Saturday 14th August and shows the highest snowpatch in the Snowy Corrie east of the northern top of Ben Macdui above the headwaters of the Garbh Uisge Mòr at an altitude of about 1260m and a grid ref. of NN 9920 9936. There might have been a depth of nearly a metre in the centre of this patch, so it may well still be surviving.

Interestingly, on my last visit to the Snowy Corrie on 22/08/09 (see the blog posting (‘Summer snowfields in the Cairngorms (2)‘), there was no snowpatch at this location but I did observe on that occasion a larger patch about 100m to the south at grid ref. NN 9929 9930 (see a photograph of this patch here), which was not there on this recent subsequent visit. I believe this is an indicator of the prevailing winds this winter being from a slightly different direction and leaving patches in different areas. 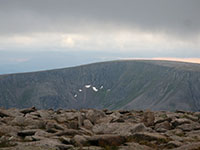 3. This photograph was also taken on the evening of Saturday 14th August and shows a quite astonishing alignment of objects – the summit plateau of Ben Macdui, the snowpatches in Garbh Choire Mòr south of Braeriach across the Lairig Ghru (there are 8, although 4 of these are small and obviously remnants of larger patches that have recently split in two), the ‘Window’ on distant Creag Meagaidh, and just visible above the snowpatches, a hovering RAF SAR Sea King that obligingly posed for me.

And to round off the alignments, a short while after this photo was taken, the sun set over Braeriach, and the new crescent moon and Venus set over Cairn Toul. I also saw some of the Perseid meteor shower later on – quite a show! 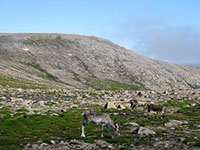 4. This photograph was taken early on the morning of Sunday 15th August and shows the snowpatch in the Snowy Corrie that I visited the evening before with another smaller one to the east – and the resident semi-wild Reindeer herd also obligingly posed for me! With the clear morning blue skies, fantastic light and no wind, I really felt that the gods of photography were smiling on me this trip! 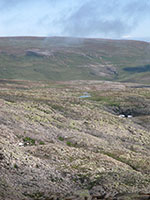 5. This photograph was also taken early on the morning of Sunday 15th August from the unnamed ridge east of Garbh Uisge Mòr. It shows another two snowpatch areas east of the northern top of Ben Macdui and above the Garbh Uisge Mòr. The patch to the left is the one I visited on my 22/08/09 trip last year (at grid ref. NN 9952 9986; see a photo from that trip last August here), but seems noticeably smaller this year, at an earlier date, although it is a bit difficult to judge the scale from such a distance. The patch to the right (which actually appears to be two patches in close proximity) is a new one to me, and one I’ve not seen before. 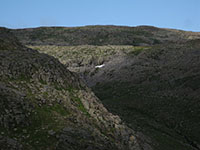 6. This photograph was taken on the morning of Sunday 15th August from a point just to the west of Creagan a’Choire Etchachan, grid ref. NO 0091 9964. It shows a snowpatch above Loch Etchachan, at the point where an unamed river descends from the Garbh Uisge Mòr area eastwards down to the loch (near my favourite grid ref. NJ 000 000!).

It’s interesting to note that all of the 5 patches I saw in the Garbh Uisge Mòr area (and also the patches in Coire an Lochain Uaine below Ben Macdui) have a south-facing component to their slope aspects. This is perhaps another indicator of the prevailing winds this winter being from a slightly different direction and leaving patches in different areas, but is also interesting because these patches have survived into August despite their slope aspects receiving a lot of solar radiation – it does seem to me that prevailing wind direction in the winter months seems to be the major factor contributing to snowpatch survival, at least in the case of the patches around Ben Macdui this year.