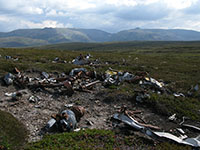 Anson wreckage with Ben Avon and Beinn a'Bhuird in the background

Last week I cycled into Glen Avon in the eastern Cairngorms with my new bike (a Giant Revel 1) from the east, starting at Corgarff Castle. The first part of the route was rougher than I expected, but the bike made it in one piece to Inchrory Lodge in Glen Avon, which is a large Victorian hunting lodge which looks rather incongrous in the remote Glen Avon, 10km from the nearest public road.

I cycled past the Linn of Avon to a bridge on the River Avon where I left my bike, and walked up a wide track to the summit of Big Garvoun. This is a very remote spot, little-visited, with no major hill summits or features, but there are great views here of Beinn a’Bhuird and Ben Avon to the south, and the Cairngorm-Ben Macdui plateau to the west, from an angle I’ve never seen before, with many of the snowpatches on the plateau visible.

To the west of Big Garvoun lies a very anonymous moorland area around the 721m minor summit of Little Garvoun, which is where I headed for. My target was the wreckage of an Avro Anson which crashed here during the Second World War.

There is a fair amount of wreckage remaining at the site, most lying in a scar in a fairly compact area at an altitude of about 700m. There is a cairn at the site that was erected in 1991, acting as a memorial to the crew that died in the crash. The crash during the Second World War is still fairly well-known in the Tomintoul area although the site itself is rarely visited, as all approaches to the site are long and difficult.

The wreckage itself is highly fragmented although the two engines are still recognisable, with propellors still attached to one. There is also what looks like a section of undercarriage. Some of the wreckage has yellow bodywork paint still visible, probably indicating the training role of this particular aircraft. A small amount of wreckage is also scattered in a ravine about 70m to the west of the impact scar.

This was a long trip (34 km in total) to a very remote location, but it was a good shakedown of my new bike, and this was an area of the Cairngorms I had never been to before. The Giant Revel 1 is a good bike, but I missed the rear suspension that my former bike (a Halfords Apollo FS.26s) had, at half the price of my new bike!

4 Responses to “Glen Avon and the wreck of wartime Anson”