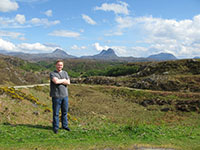 The weekend before last, Lesley and I travelled to the north-west of Scotland. We spent the first night in Plockton, and I had excellent langoustines and venison pie for dinner in the Plockton Inn. The next day we drove up to Assynt and went for short walks near Clachtoll and Achmelvich beach. The second night of the trip we stayed in Lochinver which is a working fishing village but is also a tourist destination set in the incredible scenery of Assynt – the domed peak of Suilven was visible from our B&B room window (as was the International Space Station later in the evening!). We had more great food for dinner in the Lochinver Larder (the pies are recommended by Michael Winner but that shouldn’t put anyone off).

We then went to Handa Island which was probably the highlight of the trip. A small boat took us to the island which is just off the Assynt coast – it is a big flat table of layered Torridonian Sandstone rock, distinct from the craggy Gneiss of the mainland and it’s a bit like a hidden world – the north-west coast of island consists of very high (and very scary!) cliffs which are populated by thousands of seabirds. It’s like being in the middle of a TV nature documentary, there are birds everywhere. We ate our lunch (more pies from the Lochinver Larder) with puffins looking on.

We spent the third night in Ullapool, and the next day visited Knockan Crag, where the rocks of the Moine Thrust are easily visible, and we walked up to a viewpoint on top of the crag which had an amazing view of the Assynt mountains. We also went for a short walk in Inverlael forest, and visited the new Culloden visitor centre on the way back to Edinburgh – this is pretty impressive and you can certainly see where they’ve spent all the money!

You can see the photos from the trip on my website here and here.