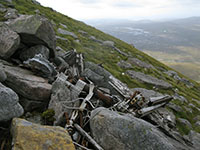 Three weeks ago whilst staying for a week in nearby Kinlochbervie, I climbed the 801m Corbett summit of Cranstackie in Sutherland. Cranstackie (along with its neighbouring Corbett summit of Beinn Spionnaidh) is the most northerly mountain (if you count a mountain as being above the Corbett height of 762m) in the British Isles, and Sutherland is a very dramatic and remote landscape.

The summit itself is not too far from the A838 road though, so it is fairly accessible. The route of ascent I took up the head of Calbhach Coire to the bealach between the two summits was up a fairly steep and bouldery slope. I had good views on the bealach eastwards to Ben Hope. The final 100m of ascent to the summit of Cranstackie is a boulderfield requiring some attention.

Unfortunately I was above the cloudbase on the summit so there was no views, but this was the only day of the whole week I spent in Sutherland without heavy rain and high winds.

I descended from the summit by a slightly different route, traversing along the northern slopes of Cranstackie. This was so I could investigate the site of a RAF Mosquito bomber that crashed here in 1943.