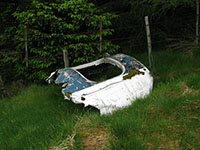 Remains of a Vickers Viking on Ben More

Last weekend I climbed Ben More near Crianlarich. This mountain is very high (1174m), and is an unrelentingly steep pyramid all the way to the top. I climbed it by its unfrequented northern flank. I was climbing it for 2 reasons – firstly to look for any remains of an RAF Wessex helicopter that crushed near the summit during a rescue operation in 1987, and secondly to investigate the Cuidhe Chrom snowpatch.

I didn’t find any trace of the Wessex, but I did find some wreckage that I believe came from another crash, that of a civilian BEA Vickers Viscount airliner in 1973 – see details and photos on my website here. This was a bit of a surprise to say the least. It does seem that the more I look for aircraft crash wreckage in the Scottish mountains, the more I find or find out about – the hills seem littered with these pieces of aviation history!

I also walked to the Cuidhe Chrom snowpatch. Cuidhe Chrom means ‘crooked wreath’ in Gaelic, and this describes the snowpatch’s summer appearance at the top of the northern corrie of Ben More just below the summit. It’s also the only snowpatch in the UK to get its name on OS maps (the 1:25000 map). The snowpatch was still fairly large and may well last into July, making it the UK’s most southerly long-lasting snowpatch. You can see a photo I took of the snowpatch on the walk here.

Visibility on the summit was excellent and I could see Ben Nevis on the horizon to the north, the Paps of Jura to the west, and I could even see some urban tower blocks to the south near the Falkirk area.

One Response to “Air wrecks and summer snow on Ben More”