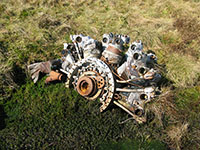 Last week I travelled to Ayrshire and went for a hike in the remote and anonymous moorland of East Ayrshire. The weather last week was extremely good, with blue skies, high temperatures and little wind, and this walk felt more like it was happening in the middle of summer than mid-March.

I walked northwards from the B743 into the featureless and boggy terrain of the area. There are two aircraft wreck sites in this area, and I had made a previous attempt to walk to these locations earlier in the year, setting off from the A71 to the north but was thwarted by difficult terrain and a new windfarm being built in the area which caused me to take a diversion.

The wreck site of the Martlet consists of a single small pile of largely unrecognisable small sections of metal debris, about 500m east of the summit of Auchenlongford Hill on Blackside at an altitude of about 400m.

The crash site of the Douglas B-26 Invader lies about 2.5km to the north of this site, at the head of the Avon Water river, in an area labelled as ‘Draw Grain’ on the OS 1:25,000 map of the area, between the minor summits of Distinkhorn and Wedder Hill on Blackside. It lies in a shallow gully at an altitude of about 340m and the large debris field is about 240m in length. Despite being at a relatively low altitude, the site is fairly inaccessible as all approaches are on pathless, featureless, boggy and difficult terrain.

Many substantial parts of the Invader are still recognisable including one of the engines half-submerged in boggy ground, sections of what appear to be armour plating, a fuel tank and an undercarriage section. A small crater contains many burnt and mangled pieces of wreckage and it is possible that the other engine was largely destroyed.

Another interesting piece of wreckage at this site is a large tyre. Another unusual aspect of the site is a box containing a visitor’s book, a unique feature of this particular wreck site.