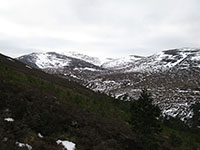 The Allt a' Mharcaidh catchment

A month ago I travelled to the Cairngorms for a high-level walk around the Allt a’ Mharcaidh catchment. The Allt a’ Mharcaidh is a relatively small river in the north-western Cairngorm mountains and is a tributary of the Spey, joining it at Kincraig via the river Feshie.

The catchment (or drainage basin, or watershed) of the Allt a’ Mharcaidh is relatively small (compared to other rivers in the Cairngorms like the Spey or the Dee) but is notable as it was chosen a couple of decades ago by the Macaulay Land Use Research Institute in Aberdeen as a sample upland mountain catchment for scientific study, and much hydrological research has been done into the soil and water chemistry of the catchment, and also the effects of precipitation and snowmelt on the hydrology of the catchment – see this page here for much detail about this.

The route of my walk started at the Lagganlia airstrip (used for gliders) and headed through the Scots Pines of the Inshriach Forest, past some rare examples of bog forest and up into the bowl of the Allt a’ Mharcaidh catchment.

On my walk I saw various instruments used in the scientific research carried out in the area, including measuring instruments in the Allt a’ Mharcaidh flow lower down in the catchment, as well as an automatic weather station higher up at an elevation of about 700m on the minor summit of Creag Follais, to the north of the catchment.

The slopes around Creag Follais have another environmental claim to fame, which is that they are host to one of the only examples of a natural tree line native to the British Isles, containing the highest altitude trees to be found anywhere in the British Isles. 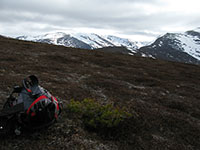 Dwarf Scots Pine at 790m on Clach Choutsaich; Braeriach in the background

Large Scots Pines can be found growing in the area to altitudes of about 600m, but on my walk around the Allt a’ Mharcaidh catchment  I discovered that this tree line does not exist as a physical demarcation line at a definite altitude – as one gains in height from 600m to 700m, the Scots Pines gradually get less dense and smaller and smaller (these dwarf or semi-prostrate trees are called Krummholz trees in North America), but don’t disappear entirely until well above 600m. I found a dwarf Scots Pine growing on the shoulder of Clach Choutsaich at 790m which may well be the highest growing tree in Britain. Although it doesn’t look very impressive, it’s still a Scots Pine – see the photo to the right.

The route of my walk continued round the south of the catchment, to the high point of the summit of Sgòr Gaoith at an altitude of 1118m. There were still large areas covered with snow at this high altitude, with large cornices at the top of the cliffs on the eastern side of the ridge to the west of Glean Einich. There were great views from the summit to Braeriach and the flat expanse of the Mòine Mhòr, and also an encounter with a group of three Ptarmigan close to the summit. My walk continued around the catchment to Geal-charn via a snow-filled glacial meltwater channel and back to the starting point at Lagganlia.

You can see all the photos I took on this walk on my website here.

4 Responses to “The Allt a’ Mharcaidh catchment, Sgòr Gaoith and the highest tree in the British Isles (possibly)”