On the summit of Lammer Law

At the end of March I did a 30km cycle route in the Scottish Borders. This route was a loop that started and finished at Longyester, and used 4×4 tracks to ascend to the 527m summit of Lammer Law and cross the high moorland of the Lammermuir Hills to the east of Lammer Law, along a track that follows a line of electricity pylons and doesn’t drop much below 400m. There aren’t many places in Scotland where you can cycle on decent tracks at such a high altitude. Unfortunately a new wind farm was being built on the moorland at Fallago Rig which I had to cycle through, although this was a Sunday and the site was quiet. I then continued on the B6355 road, which is one of the highest public roads in Scotland, rising to a height of nearly 440m, before an amazing descent, losing 200m of altitude in 4km.

Last week I did a 28km route in rural Perthshire. This route started at the vilage of Straloch and followed a private tarmac road up Gleann Fearnach to the remote farm buildings at Daldhu. At Daldhu the tarmac road ends, and forks into two 4×4 tracks, one of which continues to the head of Gleann Fearnach, climbs onto high moorland and heads to Fealar Lodge (one of the highest and most remote inhabited settlements in Britain) – this is another cycle route I hope to do some day, combining it with Glen Tilt. 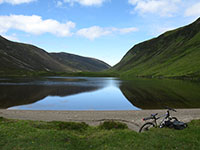 At Loch Loch in Glen Loch

For this route however I took the track which goes along Glen Loch to the wonderfully-named Loch Loch. When I tried to do this route last year on my old Apollo bike the chain snapped at this point and I had to freewheel the 10km back to Straloch (luckily mostly downhill).

This section of the route after Daldhu was more difficult with several ascents and descents along gravel tracks and the final 2km to the loch is on a narrow footpath and muddy grass. The loch itself is well worth the effort though as it sits in the heart of Glen Loch which is a secretive and narrow steep-sided glen overshadowed by Carn nan Gabhar, the highest point of Beinn a’Ghlo. The southern end of the loch has a narrow beach which on my visit had a great view of the mirror-smooth surface of the loch from grassy banks covered in Wild Thyme and Eyebright.

In 1993 a RAF Hercules crashed in this glen, killing all 9 on board. The crash site is just south of the loch and after coming back from the loch on my bike I walked to the crash area at which there is a group of memorials and a large scar that marks the location where the Hercules impacted. You can see my page about this wreck site on my website here.

3 Responses to “Cycle routes in the Borders and Perthshire”