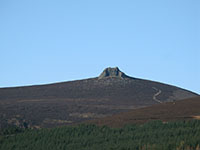 The granite tor on the summit of Clachnaben

Last week I travelled to Aberdeenshire and walked to the 589m summit of Clachnaben from Glen Dye. Despite being a relatively small hill, Clachnaben is very distinctive in having an unusual and large granite tor on the summit.

The weather conditions on this walk were quite unusual with not a trace of snow for many miles around despite the late winter date (February 24th). Temperatures were quite mild and the air was very clear but the wind was very strong so it was cold higher up the hill.

Views from the summit were excellent, with views to Mount Battock, Bennachie and the only snowfields visible on the Cairngorm summits. The North Sea and the tower blocks of Aberdeen were also visible to the east, as was the Firth of Tay and the outskirts of Dundee to the south. The summit tor provides some easy scrambling to get to the top, but this wasn’t very pleasant in the high winds.

Clachnaben is also notable in having two aircraft wreck sites near its summit. These two aircraft both crashed about 1.5km south-west of the summit and the two wreck sites are only about 1km apart.

One of these sites is that of a Hawker Audax which crashed here in 1939. The Hawker Audax was a variant of the Hawker Hart biplane. This Audax wreckage site is one of the oldest remaining in Scotland, and is the only pre-Second World War site I have visited. The wreckage has lain at the site for over 72 years.

At the site, which lies at an altitude of about 500m just south of the minor summit of Hill of Edendocher, lie the remains of the main fuselage and wing airframe along with a few other smaller pieces. 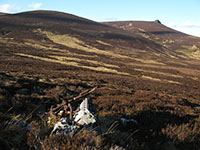 Kestrel engine from the Miles Master, summit tor of Clachnaben behind

The other site is that of a Miles Master which crashed here in 1941. The wreck site consists of two small debris fields about 70m apart at altitudes of about 390m and 410m, just north of the minor summit of Cairn of Finglenny. The higher debris field contains the single V12 Rolls Royce Kestrel engine from the Master, as well as the propellor hub. The lower debris field contains many mangled metal fuselage panels with yellow painted livery still visible, identifying this aircraft’s role as that of a trainer.

On the return leg of the the walk in the late afternoon, conditions were right for me to catch a glimpse of the planet Venus in full daylight, nearly an hour before sunset. I’ve experienced such excellent seeing conditions once before, allowing me to see Venus in daylight with the naked eye (see my blog posting ‘A Christmas trip to the freezer: Sgor na h-Ulaidh and Spidean Mialach‘).