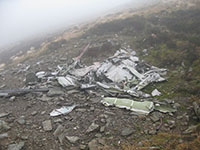 Last week I went for a short walk in Glen Lethnot, one of the Angus glens north of Brechin, with my friend Katy. We walked from the farm at Auchowrie, up the west slope of Hill of Wirren, to look for two air wreck sites on the hill. However the weather was not as good as we had hoped and the light was very poor in the low cloudbase (not very good for photos), so we only investigated one of these sites, that of a Bristol Beaufort bomber that crashed on the hill in 1942.

The site of the wreck lies near the 678m summit of Hill of Wirren, about 750m west of the summit trig point. A small crater lies on the western slopes of Hill of Wirren at an altitude of about 610m, which contains wreckage parts from the Beaufort, including some undercarriage pieces. A trail of wreckage parts continues down the hill from the crater for about 20m.

About 1km south-east of this wreck site lies the remains of the other wartime crash, a RAF Consolidated Liberator that also crashed near the summit of Hill of Wirren, in 1944. I will wait for a better day to return and visit this site.

About 500m south-west of the Beaufort wreck site, lower down the hill, there is a cairn with a piece of what appears to be aircraft wreckage embedded in it. This may come from the Beaufort or the Liberator.

It was quite interesting to hear Katy’s perspective on the site, for despite her being a very experienced mountaineer and walker, she had never seen a wreck site like this in the Scottish mountains and I think she appreciated the oddness of it!