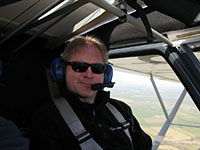 At the controls of the aircraft

Last month I went for a short one-hour flight over Ayrshire. Lesley had bought me a voucher for my birthday last year for a one hour flight experience offered by Sportflight Scotland, who operate from Strathaven airfield in Ayrshire, which has a small grass runway.

I was very lucky with the weather, as the scheduled day for the flight had clear skies although there was some wind. The plane was an Ikarus C42, a German-made aircraft which is very small and requires hardly any length of runway for take-off and landing.

Take-off was short and in seconds we were high above the airfield, turning back for a low pass so that Lesley and my parents (who had travelled from Kilmarnock to watch) could take photographs of the flight. After flying off from the airfield the pilot demonstrated the controls, at one point putting the plane into a rapid descent which made my stomach lurch and prompted me to tighten my seat harnesses – I’m sure the pilot just did this to check that I was awake and see how I was coping with the flight.

The views were, needless to say, tremendous. The cockpit of the Ikarus C42 has been designed with observation in mind, and the all-round viewing experience is astonishing – it just brings home what a limited experience there is looking out of the small window when flying in a commercial aircraft. The cockpit was also very snug and would be a tight fit for anyone who is large in any direction – the seats are actually safety-rated to take a suprisingly low weight limit for a person, and I wonder if anyone turning up for a flight like this has to be turned away for the acutely embarrassing reason that they are too heavy for the plane.

The pilot let me take the joystick control after 5 or 10 minutes of being airborne, the first time I’ve ever flown a plane. The whole experience of actually controlling a plane in flight is a wonderful feeling of a mixture of freedom and a plunge into an extra dimension of movement – suddenly you have the whole sky to move about in.

The Ikarus C42 seems like quite a straightforward plane to fly, with simple controls and I found it easier than I expected to fly the plane – this was caused no doubt by the fact that the pilot had dual controls and was constantly doing all the difficult things like monitoring the altitude, airspeed and throttle and observing the sky around for other aircraft. Also, the trim control on the joystick actually made the plane almost fly itself, but I had good fun banking the plane and making it dive and climb. I think the pilot would have been happy for me to be more adventurous but this was my first time flying a plane, so I was a bit nervous (although enjoying every minute of it).

When in control of a small plane like this, you can really feel the air and its effects, especially in the wind. It feels like a big watery soup, and this actually feels quite comforting as it feels like you are floating along on a very resistant medium with no possibility of falling out of the sky – of course, this is only apparent if the speed of the plane is kept above stalling speed!

I’m not sure that I’d make a particularly good pilot – multi-tasking is not something I’m great at, and I found it hard to control the plane and carry out a conversation with the pilot!

The route of the flight took us west along the Irvine valley, over Loudon Hill (with views behind us to Tinto Hill) and towards the Firth of Clyde coast and the snow-capped summits of Arran on the horizon. The air speed was not particularly high flying into the westerly wind, not much different to motorway speeds, and so it took about twenty minutes to get to Kilmarnock. Once over Kilmarnock, I handed the controls back to the pilot, and he flew the plane low over the town so I could take some photographs of my parents’ house – we were so low that I could have easily waved to them if they’d been in the garden.

There were also great views of Rugby Park and the large modern building of Grange Academy which is now the most prominent landmark in Kilmarnock from the air. I’ve only ever had aerial views like this before from commercial aircraft flights, and then only for seconds whilst taking off and landing – it felt great to be circling around and taking in the view almost at leisure and directing the pilot where to go so I could get the best photographs. You can see the photographs I took on the flight on my website here.

On the return back to Strathaven the pilot ascended to 4000ft, the altitude of the cloudbase and our maximum altitude for the flight. The aircraft can fly as high as 10,000ft, but cannot fly in clouds and the pilot flew around them. Towards the end of the flight, I took the controls once more and banked the plane in a curve around the town of Strathaven where the pilot took back the controls for the descent approach to the airfield and the surprisingly comfortable landing.

After the flight I went for a meal at the nearby Loudon Hill Inn with Lesley and my parents, and then Lesley and I climbed to the summit of Loudon Hill – it was strange to see the views of the Irvine Valley from the perspective of the hill after I had been 3000ft above it only an hour or so before.

A great day out!