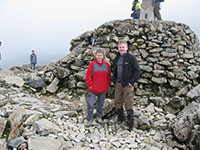 On the summit of Ben Nevis

Last week I climbed Ben Nevis with Lesley’s sister, Kate. Kate had had an ambition to climb the highest mountain in the British Isles, and asked me to guide her as she is not an experienced hillwalker.

Because the aim of the trip was simply to attain the summit, and not take Kate anywhere dangerous or uncomfortable, I chose to do this the simplest way, using the ‘tourist’ route up and down. I knew there are many things about this route that make it a less than pleasant route choice, though, and so it turned out to be!

This was in fact only the second time that I had been on Ben Nevis, the first being in 1993 when I climbed the mountain by the much more rewarding (although more difficult) Carn Mòr Dearg arête route. Ben Nevis is the sort of summit that serious hillwalkers and mountaineers do once and then never return to – it’s not representative of the pleasures and challenges of the Scottish mountains at all.

The most unusual thing about it is the volume of walkers attempting the mountain. Even though we were doing the walk on a monday, there were probably about 1000 people on the mountain in total throughout the entire day, of all descriptions, from young poorly-equipped teenagers to middle-aged fell runners.

The tourist route is a real slog on a maintained path that climbs the mountain remorselessly from Glen Nevis in a series of switchbacks from sea-level (apart from a relatively flat section near Lochan Meall an t-Suidhe, or the ‘halfway lochan’), over increasingly bouldery ground.

The actual summit area is easily the most depressing and unpleasant mountain summit I have ever been on. The remains of the summit weather observatory are an interesting relic of the mountain’s past, but a bit of an eyesore. There are cairns everywhere, some approved by the owners and caretakers of the mountain, the John Muir Trust, but many not. Unsurprisingly, there are crowds of people on the summit and the atmosphere is more like that at an open-air festival than a mountain summit over 1.3km above sea level.

Unofficial memorials to deceased relatives are everywhere, but unfortunately a lot of these are indistinguishable from litter. Litter is a huge problem on the summit and on the tourist route. The John Muir Trust organise cleanups of the mountain with volunteers about three times a year. The last cleanup was on 29th June, not that long ago, which means that all the trash I saw was only a few weeks’ worth! Some of these ‘memorials’ are nothing more than vandalism, the worst example I saw being a metal plaque cemented amateurishly onto the rocks of the summit cairn, with an engraved inscription reading “<name> was here”.

There wasn’t much of a view from the summit as the cloudbase, which had been lifting throughout the day, had not quite risen above the level of the summit. I was still able to observe however the long-lasting snowpatches high up on the northern face of the mountain in Tower and Gardyloo Gullies.

After leaving the summit, we had excellent views across Glen Nevis to the summits of the Mamores and the town of Fort William, far below. The descent from the summit was interminable and not pleasant though, especially the lower half which is a leg-destroying ordeal down a maintained path which has seemingly been constructed in such a way as to maximise the pounding that calves and knees receive.

Despite this, Kate and I had an enjoyable day and she was very happy to achieve her ambition. We had good weather for the whole walk with no rain or wind, even on the summit, which was very lucky given the weather that the UK has experienced for the past 3 months. We celebrated with fish and chips in the Real Food Cafe in Tyndrum.