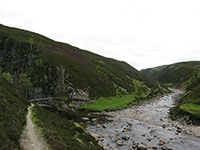 Five weeks ago I undertook an expedition from Blair Atholl to Aviemore. This was a long walk, 66km in total that took me three days with two nights of wild camping. This was a route that I had wanted to walk for a long time as it’s one of the longest largely linear walking routes that can be done in Scotland through terrain that has no public roads or settlements of any kind, and travels through one of the most remote and wild landscapes in the British Isles. It also has the advantage of having a train station at either end meaning that a return journey to the starting point can be done easily by train.

I started the walk at Blair Atholl train station and walked through the grounds of Blair Castle which were busy with holidaymakers and people using the caravan site, before I made my way in warm evening sunshine to the gravel road that runs through Glen Tilt alongside the river Tilt to Forest Lodge. Forest Lodge (part of the Atholl Estate) would be the last inhabited building I would pass until Whitewell Farm near Aviemore, two days of walking from this point. The road to Forest Lodge from Blair Atholl is not a public road, but standard cars can be driven on it with care all the way to the lodge, a distance of about 13km. I camped on some flat ground next to the river a couple of kilometers past the lodge, surrounded by the steep walls of the Glen.

In the morning I picked up a convenient felled tree branch from a neaby plantation in anticipation of using it  to provide some assistance with the crossing of the Geldie Burn which was one of the major obstacles of the day’s route – there is no bridge at this point on the route and at times of high water this river crossing can be very dangerous or impossible.

Before that was another river crossing using the Bedford Bridge, at the confluence of the Tarf and Tilt rivers. This seems like a very tranquil spot in the remote heart of the Scottish Highlands, but the bridge was built in 1886 after a man drowned trying to cross the river here (see photo above). 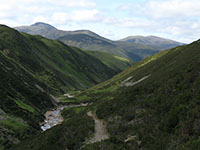 Glen Tilt is a narrow ‘V’-shaped glen, in contrast to other ‘U’-shaped glacially-eroded glens in the Highlands. Beyond the Bedford Bridge the glen narrows, and there is a great view south down the trench of the glen towards the huge bulk of Beinn a’Ghlo (see photo to the right). There was plenty of interesting plant life on the route throughout the whole of the Glen, including Wood Anenomes, Lady’s Mantles, Dog Violets and Bird’s-foot Trefoils.

I carried on to the head of Glen Tilt which is an area of flat and open ground at an altitude of about 500m that marks the watershed between the Tay and the Dee. This is also the entrance to the area of the Cairngorm mountains proper, and there is a real sense here of walking from one type of landscape enviroment into another, from the narrow and slightly claustrophobic enclosure of Glen Tilt into the wide vistas of the Geldie and the Dee – it is also a very remote area, far from public roads. It was at this point that I caught my first glimpse of the main Cairngorm summits, including Beinn Bhrotain, Cairn Toul and Ben Macdui, with extensive snowpatches remaining at high elevations on the mountains.

When I approached the Geldie Burn I could see that the river level was quite low and would not present any major difficulty in crossing. I removed my boots and socks and waded across in sandals, using the branch I had carried for stability but this was hardly necessary as the water only came up to my calves.

Then I walked on past White Bridge and the Chest of Dee, passing several walkers who were obviously on a day trip from the Linn of Dee 5km away, and headed into the southern end of the Lairig Ghru. At this point I faced a choice; I could head through the Lairig Ghru or I could head up onto the summits and cross the Cairngorms at high altitude. The first option would be a relatively low-level walk (although the high point of the Lairig Ghru is still at an altitude of 835m) which would be sensible if the weather was bad, but as the weather was good (it was warm enough to be walking in shorts) I decided to attempt a route over the summits. 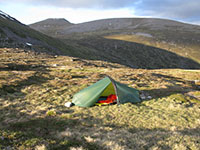 Campsite next to Loch nan Stuirteag on the Mòine Mhòr plateau, Cairn Toul in the background

I headed up the Lairig Ghru on the west bank of the Dee, passing some large ice-age moraines and walked into Glen Geusachan below the imposing south wall of the Devil’s Point, where the path disappeared and the the terrain became difficult with boggy and undulating heather. I planned to camp next to Loch nan Stuirteag and made my way up the head of the glen, with the wind increasing with height. By the time I got to the loch at the edge of the Mòine Mhòr plateau at an altitude of about 850m it was too cold for shorts, so I set up my tent quickly and put some trousers on. The loch was a good place to camp (see photo to the left) after a very long 11-hour day of 29km walked, with fine views to Cairn Toul and I think I was able to see on the far side of the loch some of the semi-wild reindeer herd that is sometimes set free to roam over the high ground in the Cairngorms.

Although I did not feel particularly cold in the night, I awoke in the morning to a light fall of snow in the form of very small needles which lay in patches on the ground and on my tent. I had not expected temperatures to be this low in early June and this day was noticeably cooler and cloudier than the previous two had been. I had a vague plan to walk along the summits of Cairn Toul and Braeriach but I could see that the summits were above the cloudbase so I opted to try an alternative slightly lower route across the Mòine Mhòr plateau towards Coire Dhondail.

The early morning walk across the bleak and featureless plateau (and also across another watershed, from the Dee to the Spey) in cold and clear sunshine was quite exhilarating with expansive views to the south. Just a couple of weeks previously, this plateau had been entirely covered in snow, but warm conditions since had stripped all the snow away, apart from a few small patches to the south in Coire Mharconaich. 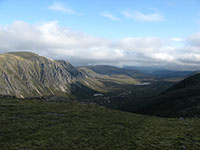 I reached the lip of Coire Dhondail at an altitude of about 1000m, which was to be the highest point of the entire expedition. Here there were very impressive views along the entire length of Gleann Einich (see photo to the right), which I had walked down only 13 days previously (see my previous blog posting ‘The Rothiemurchus Forest and Creag a’Chalamain‘).

The descent into Coire Dhondail was via a stalkers path which I knew to be quite steep but which I had never been on before. The path proved to be quite precarious and exposed in places and would probably have been impossible on the recently melted snow without crampons and ice axe (and even then still very dangerous) – this track was the hardest obstacle to overcome on the whole route of the expedition.

The walk from the bottom of Coire Dhondail along Gleann Einich was straightforward on the gravel track that runs the entire length of the glen to the Rothiemurchus Forest and Whitewell. From Whitewell I walked on the first tarmac roads since leaving Blair Atholl train station and into an Aviemore busy with tourists, a jarring contrast to the last two days of emptiness (although I saw several hillwalkers at nearly all points of the route, the exception being upper Glen Tilt which was entirely devoid of people).