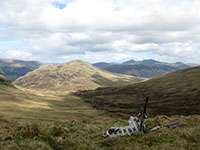 Remains of a Whitley bomber on Beinn Stacath

Last weekend I was walking in the northern Trossachs near Balquhidder. I walked up to a 771m Corbett summit, Beinn Stacath. This hill is unnamed on the OS 1:50000 map, but has in the past been referred to as Stob Fear-tomhais and Ceann na Baintighearna and it now seems that Beinn Stacath is the agreed name.

The weather was cold and windy, and there were several showers of rain throughout the walk which was falling as snow on the nearby summits of Stob Binnein and Ben More. It’s still winter at the moment in the Highlands, and the weather at the moment is nowhere near as good as it was this time last year when I climbed summits in Letterewe and Ben Wyvis, and went cycling in Glen Feshie.

I saw a lot of animals on this walk, both wild and domestic. There was a lot of cows with newly-born calves, a lot of sheep with newly-born lambs (I saw one that must have been born only moments earlier), and I saw some deer and also a red squirrel by the road near to the start of the walk (only my third sighting of one). I had to skirt around the domestic animals to give them a wide berth so the route took me over some marshy ground, and with the rain as well I was pretty soaked by the end of the day.

Near the summit of Beinn Stacath is wreckage from an RAF Armstrong Whitworth Whitley that crashed in 1941. There are some scattered remains at the site, mostly unidentifiable mangled pieces of metal, but some clearly undercarriage parts. There is a noticeable scar on the hillside where the aircraft impacted the mountain, and wreckage is scattered from this point downwards to the Allt Fathan Glinne below.

This site used to be one of the most well-known wreck sites in the Scottish Highlands – large and intact pieces of the aircraft were highly visible until 1980, when the site was largely cleared.