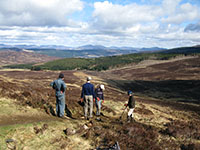 On Sunday last weekend I travelled to Schiehallion to join a party of John Muir Trust volunteers undertaking path repair work on the maintained path that is situated on the long eastern ridge of the mountain.

The John Muir Trust (JMT) is an environmental conservation charity and landowner and owns several parcels of land throughout Scotland, including many in mountainous and remote areas (Bla Bheinn on Skye, Ladhar Bheinn in Knoydart and Ben Nevis in Lochaber) and organises conservation work parties throughout the year composed of volunteers to carry out work on the land such as path and fence maintenance, litter clearing and woodland regeneration.

The Trust takes its name from John Muir, the pioneering Scottish conservationist who was largely responsible for the creation of the idea of National Parks such as Yosemite in the Sierra Nevada mountains of California to protect areas of wilderness in the USA from commercial and industrial exploitation. I recently joined the Trust and also visited the birthplace museum of John Muir in Dunbar in East Lothian, not far from Edinburgh. I have also just finished reading The Wilderness Journeys, a collection of his writing. 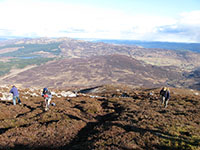 This is the first time I have done something like this, so I was unsure what to expect but ended up having a very good day. The day started at 9am in the Braes of Foss car park, the usual starting point for the walk to the summit of Schiehallion, and finished about 6pm. Since buying the East Schiehallion estate in 1999, the Trust has carried out a huge program of work on the mountain, removing the badly eroded original path up the mountain and creating a new one which travels up to an altitude of nearly 900m on the east ridge, and the party I was in carried out work on the path right up to this point, so I had to be equipped for a full day of mountain hillwaking. The kind of work I got involved in was creating boulder steps on steeper areas of the new path, cleaning drainage culverts and spot turfing on the surface of the old path to help the vegetation recover. I think a good description of all of this would be mountain ‘gardening’, as it was lots of muddy work digging trenches with mattocks and spades and shifting large boulders of quartzite with pinch bars, but high up on a Scottish mountain instead of in a garden in a town or city.

I first climbed Schiehallion in April 1995 before the new path was constructed and I remember the badly eroded and wide muddy old path how it used to be. The new path is an enormous improvement and has been constructed in such a way that it only uses materials taken from the surrounding area and ‘funnels’ walkers into a narrow area so it minimises as far as possible any impact of human intrusion into the natural environment.

To add to the ‘environmental’ theme of the day (and perhaps more importantly, to share petrol costs!) I gave a lift in my car to a couple from Edinburgh, Anna and Paul, who had not climbed Schiehallion before but took the opportunity near the end of the day to walk up to the summit.

The work party was very lucky with the conditions during the day, with blue skies all day (apart from a couple of small light snow showers). The air was exceptionally clear, giving amazing views towards Loch Tummel, Beinn a’Ghlo and a few of the summits in the Cairngorms, which did distract a bit from carrying out the sweaty physical labour! For mid-March, conditions were also benign in terms of the unusual lack of snow on the mountain which meant useful work could be carried out at a fairly high altitude, which must be relatively rare for this location at this early spring date. The lack of snow was also notable on the surrounding summits, giving the mountain landscape an appearance more similar to that of June than March.

From the path a good view was also had of a line of electricity pylons to the east which form part of the Beauly to Denny power line as it routes through the Pass of Keltney. It appeared that some surveying work was being carried out on the line, presumably connected with its redevelopment and upgrade. The newly-constructed Griffin wind farm was also visible from the path on the south-eastern horizon.