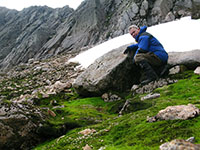 At the Pinnacles snowpatch in Garbh Choire Mòr

The corrie is perhaps the most inaccessible non-climbing location in the whole of the British Isles. I have tried to reach the location on several previous attempts but the corrie is located in the heart of the Cairngorm mountains many kilometres from any roads, and is surrounded on its north, west and south sides by steep and bouldery ground. It is possible to descend into the corrie from the north, at a point just east of Carn na Criche (OS 10-figure grid ref. NN 94160 98316), and from the south down the Corrie of the Chokestone Gully (OS grid ref. NN 948 976), but these are rocky and steep scrambling routes that require a bit of nerve. The approach from the Lairig Ghru in the east has no steep ground but necessitates a long walk over pathless and difficult terrain.

As all approaches to the site are long and difficult, then any visit (unless this involves a two-day trip and an overnight wild camp) must also be before the length of the daylight gets too short. This means that the optimum time for a visit is in autumn, in the second half of September. 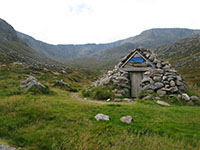 Three weeks ago on September 23rd, I finally succeeded in reaching the location. I started at Linn of Dee at 8am, with the sun not long risen and the air very cold, and cycled the 7km through Glen Lui to Gleann Laoigh Bheag. From there I walked to Glen Dee and the Lairig Ghru path, past the impressive vistas of Glen Geusachan and The Devil’s Point, to the entrance to An Garbh Choire. At this point, I left the relatively easy terrain of the Lairig Ghru path and headed westwards through boggy, pathless and undulating terrain and into An Garbh Choire and up to the Garbh Choire shelter (see photo to the right). The shelter itself is small and fairly dilapidated, and probably not a place that I would choose to spend the night. 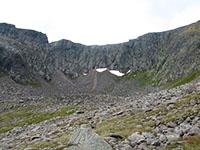 Further up An Garbh Choire beyond the refuge the walking becomes easier and there are a few areas of relatively flat and grassy ground at the entrance to Garbh Choire Mòr that would be suitable for wild camping, perhaps a more preferable option if I was to revisit the area in the future. The final approach to the snowpatches themselves is over an extensive boulderfield and then a short steep ascent.

I got back to the Linn of Dee just after sunset, 12 hours after I set out, with only about 30 minutes time at the snowpatches to spend examining them and taking photographs. The total round-trip distance was 40km, probably the maximum that can be done in daylight hours at this time of year. 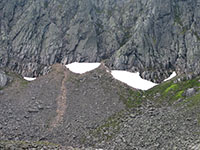 On my visit to Garbh Choire Mòr there were three snowpatches visible high in the corrie, at an altitude of about 1100m (see photograph to the right) – these are named after climbing routes on the cliffs above them and are known as (from left to right in the photograph) Michaelmas Fare, Sphinx (named after the Sphinx Ridge) and Pinnacles (named after the Pinnacles Buttress). On my visit the Pinnacles snowpatch actually had the remnants of a fourth small snowpatch about a few metres in length next to it. 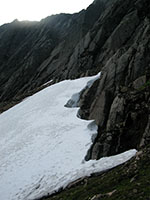 The Pinnacles snowpatch; the Sphinx snowpatch can just be seen behind it

The Sphinx snowpatch is the most persistent snowpatch in the whole of the Scottish mountains. The snow the Sphinx snowpatch consists of has not fully melted since October 2006 (meaning the snow when I visited it was six years old), and has only disappeared completely six times since observations began in the late 19th/early 20th century, in 1933, 1953 (when the Pinnacles snowpatch survived), 1959, 1996, 2003 and 2006, and then only for a short period in the autumn before winter snowfalls arrive. This means that the ground below the Sphinx snowpatch has probably been completely clear of snow for a combined total of only a few months since the start of the cold climate period in the 16-19th centuries known as the Little Ice Age. This is the closest Scotland comes to having a glacier. 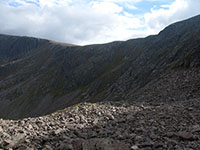 Below the snowpatches at the foot of the bowl of Garbh Choire Mòr is a feature that has caused much debate in recent years (see photo to the right) – this is a small ridge of boulders and soil that was once thought to be a moraine that may have been modified by glacial ice as recently as the 19th century, thus providing evidence (from lichenometry, pollen analysis and radiocarbon dating) of recent glaciation in the Cairngorms. However, current expert opinion is that this feature is a protalus rampart that does not require glacial ice to form, and is probably still being modified in recent times by rockfall from the surrounding cliffs and wind-blown debris from the Braeriach plateau to the west of Garbh Choire Mòr.

Glaciers have probably not existed in Garbh Choire Mòr since the end of the last widespread period of mountain glaciation, the Younger Dryas or Loch Lomond Stadial, which ended over 10,000 years ago. However, during the Little Ice Age there was almost certainly a large perennial snowpatch in Garbh Choire Mòr that filled the whole corrie. See my previous blog postings for more information about this, ‘The Scottish mountains: on the glacial ‘knife-edge’ and ‘Scottish glaciers‘, particularly the comments.

The appearance of the snow in the Garbh Choire Mòr snowpatches is that of extremely hard and compact ice, and is more accurately described by the term firn. I saw no sign of any melting occurring on my visit, and there was a layer of patchy fresh snow of about 1-2cm thickness from a recent fall in the last week covering the snowpatches (I experienced a shower of snow on the summit of Cairn Gorm on September 19th, four days before my visit to Garbh Choire Mòr, see a photo here).

Since my visit, there has been some further snowfall and low temperatures in the Cairngorms, and the three patches will almost certainly survive into next year.