The mountainous and wild areas of Scotland have an unusual, little known, and some might say slightly macabre feature; namely the wreckage of many aircraft that have crashed and have, because of their location, never been wholly removed.

These wreck sites vary hugely in the amount of aircraft debris left behind and in their accessibilty. They also represent the sites where many airmen have died, and while in some cases the location is marked by a memorial, in most all that remains is twisted and weather-bleached metal. Indeed, perhaps another reason that this wreckage has remained uncollected by the relevant authorities (whether military or civilian) is to provide a sort of lasting marker to the deaths of the pilots and crew involved. 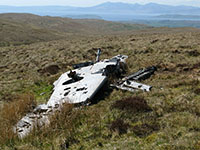 It should of course be noted that removing pieces of wreckage from any of these sites without good reason (e.g. as trophies or souvenirs) is a deeply irresponsible thing to do - and it could be illegal. The Protection of Military Remains Act 1986 forbids tampering with military wreckage (although this act seems primarily designed for maritime wrecks). These sites are also almost certainly 'cultural heritage' sites described in the Land Reform (Scotland) Act 2003, which explicitly states that removal of objects from these sites is forbidden.

It should also be noted that there is always the chance that live ammunition, personal artefacts and possibly even human remains may still be found at some of these sites, even after many years. They are in effect important archaeological and historical sites and act also as war graves and memorials. Souvenir hunting, graffiti and moving items should not be done by visitors to these sites (although unfortunately this is common). 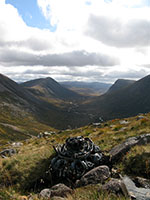 The incongruity of finding crashed aircraft in the Scottish mountains is hard to exaggerate; in wild, barren landscapes far from the towns and cities that most people live in, in some cases with no view of anything that looks like civilization or man-made features, amongst empty high-altitude boulder fields, or in peaceful heather-clad ravines, there exist the remains of what are, in most cases, instruments of warfare. Many aircraft wrecks date from the period of the Second World War but some are from the post-war period. Most wreckage comes from military planes and is testament to the fact that often these flights were (and still are) undertaken in bad weather conditions, at low altitude and through dangerous terrain, because of the extreme requirements of wartime or defence in peacetime.

Although looking for these wreck sites can appear to be a morbid and insensitive pursuit, if done with the full knowledge of the sacrifice made by the pilots and crew of these aircraft it can be an interesting and humbling experience, and something that can add an extra dimension to exploring the Scottish mountains. 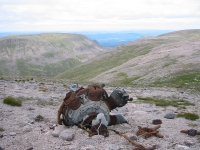 Although all of the upland areas of the UK have their wreckage sites, Scotland has some of the most unusual and remote sites. Some are actually on the summit of 3000ft mountains, and some are nestled amongst the most dramatic scenery to be found anywhere in the British Isles. Despite this (or perhaps because of it), the wreck sites of England are much more well-known and documented and hopefully the information I present here will redress the balance of coverage.

I am currently visiting crash locations in the high ground areas of Scotland, taking digital photographs of the sites and collecting accurate positional data using a GPS receiver, and displaying these locations using Google Maps, in the same manner as I have already done with the hillwalking photos on the rest of my website (see the 'Crash sites visited' section). I hope this will serve as a useful resource from the perspective of the hillwalker, something that the existing resources don't do all that well. 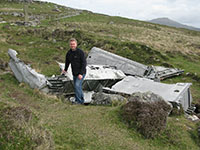 Hopefully this will also become a record of these sites for the purposes of historical interest and aviation archaeology. Something I have become aware of as I have visited and investigated these sites is the impermanence of them; they rust and decay, they disappear into boggy soil or new plant growth, and parts are removed or dissipated by souvenir hunters, extreme weather conditions or responsible authorities (like museums or the RAF).

It should also be noted that extensive snow-cover can make finding these sites a fruitless pursuit as all the wreckage may be underneath a thick blanket. This means that (especially for the sites at higher elevations) this is essentially a summer and autumn activity.